Anyone who has multiple boys in a row at some point asks themselves a question: did I just get ‘lucky’ or are we only able to have boys? As you can see, we certainly asked that question… 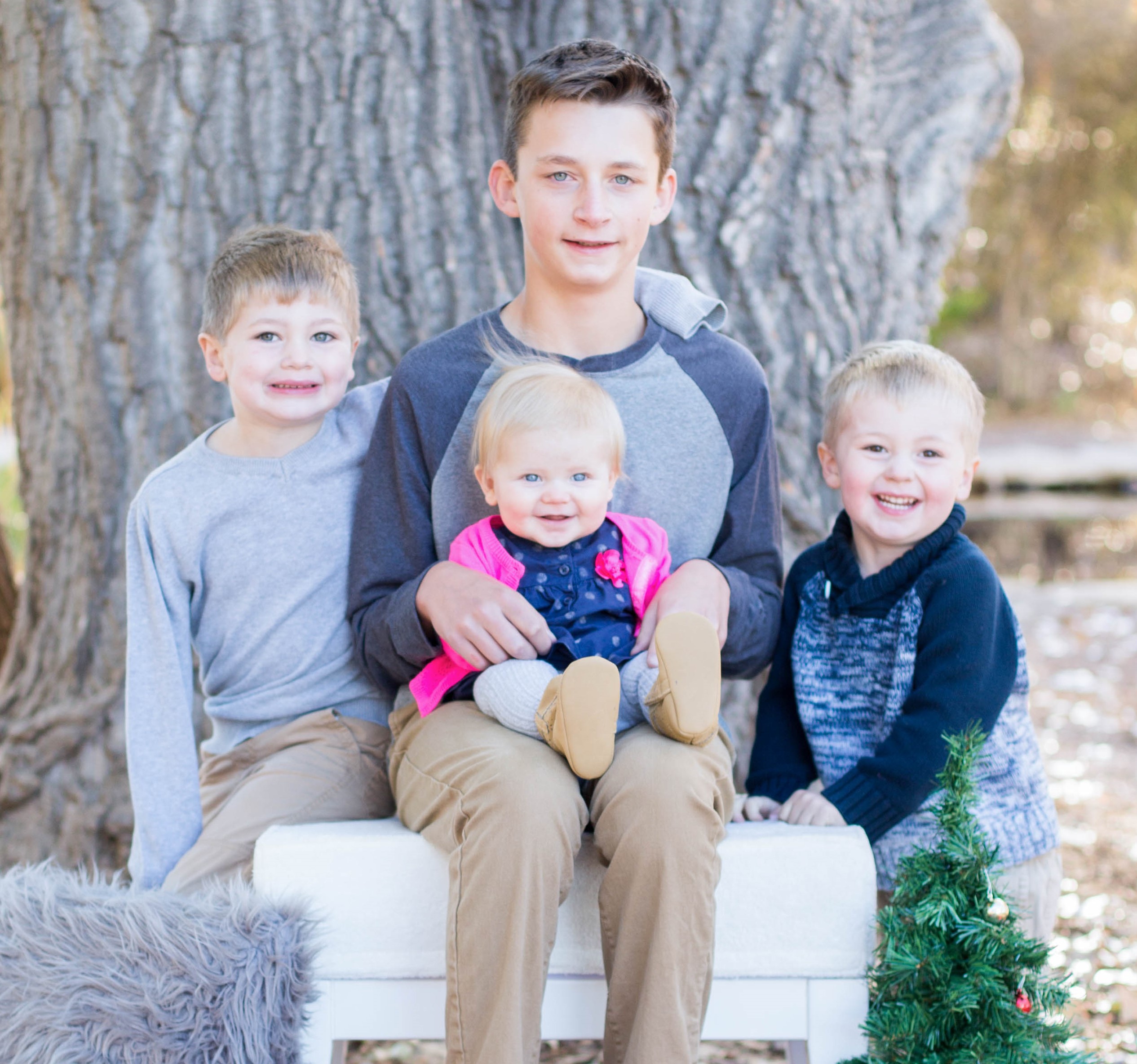 When we had our third boy in a row I started to wonder: how many children do you have to have of a given sex before you can statistically conclude that there is something other than random chance influencing to the outcome?

We can cast this problem as a classic coin flip probability, and use a statistical measure (the p-value) to make a judgment on if there could be something going on beyond chance. Then we can conclusively and statistically answer the question: How many is too many?

Turns out the answer is 5. If you have 5 children in a row, and they are all boys, you can statistically conclude there is something else at play. Or is it 8? Or 9? Perhaps you’ll have to read and decide for yourself…

Probability Distributions and The Null Hypothesis

Hypothesis testing is one of the most important and foundational concepts to Data Science. Almost every problem involving data can be cast into this framework:

The null hypothesis is the statistical equivalent of assuming innocent until proven guilty. In the case of having children, the null hypothesis would presume that the probability of having boys and girls is equal (you are trying to prove that this is is wrong, so you start with the assumption that it is correct).

If you are trying to evaluate the fairness of a coin, the null hypothesis suggests the coin is fair. If you are trying to determine if the distribution of defects across a lot of semiconductors is driven by distance from center of the chip, you assume that defects are equally likely to occur anywhere.

If you can successfully show (through calculation or simulation) that your observed outcome (in our case, 3 boys in a row) is highly unlikely under the null hypothesis, you can reject the null hypothesis. This is typically done with things that are easily quantifiable (like coin flips, die rolls, defects), but we follow a similar process with non-quantifiable things. For example, I might judge that the probability that a certain toy ends up under my son’s bed given that he didn’t take it and stash it there is exceptionally low. In this case, the null hypothesis (he is innocent) is rejected because of the evidence (found charger, charger doesn’t have legs).

If we did 100 experiments, how many times might we observe our outcome based on random chance?

For our simple case, where we can define binary outcomes (boy/girl, heads/tails, pass/fail, etc…), and we’re interested in calculating the probability of an outcome that meets a specified criteria (5 girls out of 5 children), the binomial distribution allows us to calculate this directly.

The binomial distribution is given by:

Lets calculate this probability for families with 1-10 children of the same sex, and see where the cutoff is: 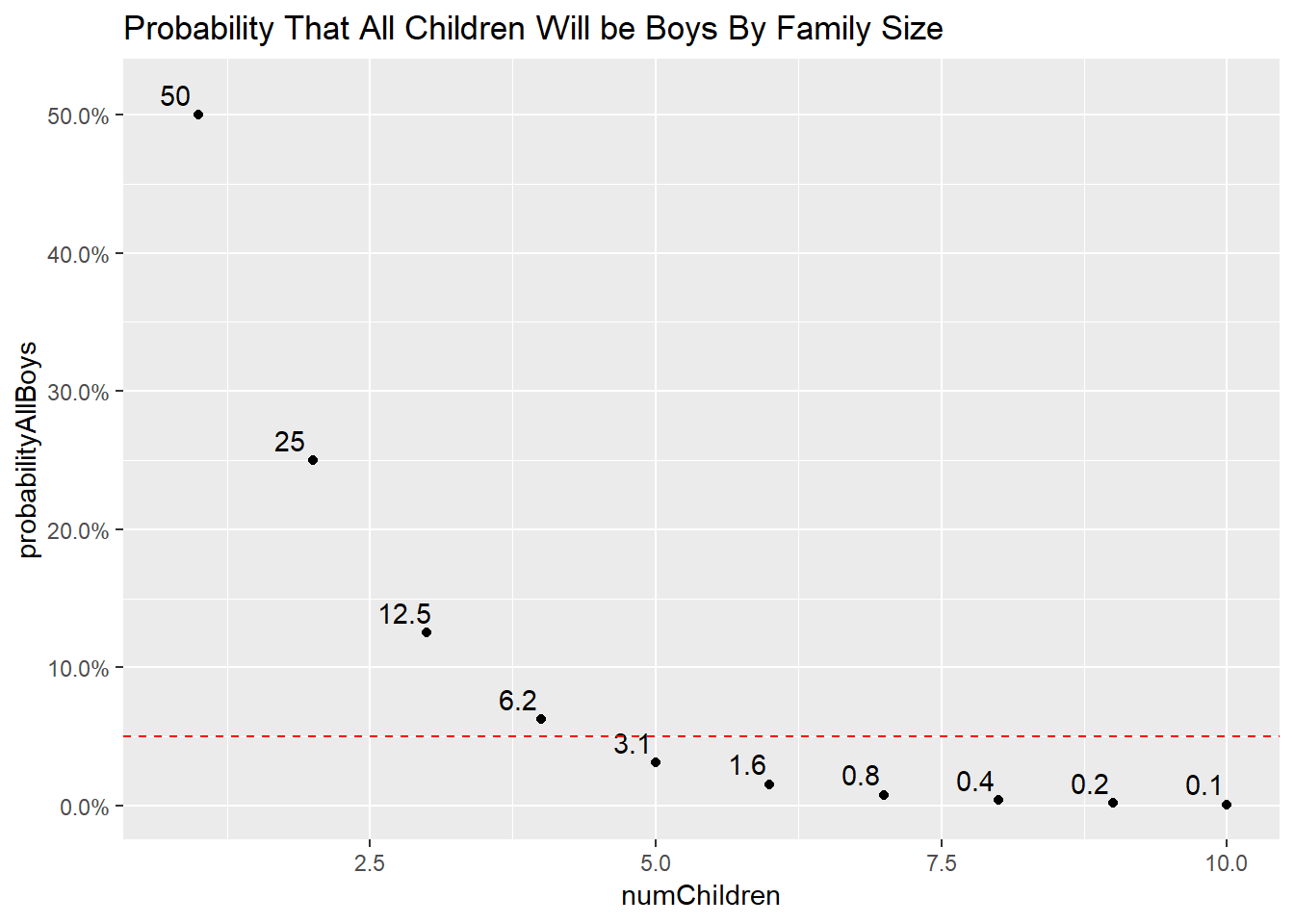 This chart shows that if the probability of boy and girl are equal, and you sampled 100 families with 5 children, you would expect ~3 of the families to have all boys!

Often I encounter problems that are complicated enough that the odds are not directly calculable . In this case we can employ my favorite method for doing hypothesis testing: Simulation.

Lets say we didn’t know (or were too lazy) to calculate the equation above. We could imagine a set of pretend families who had pretend children in a way that aligns to the null hypothesis (50/50 chance of boy/girl), and figure out how often those families had all boys.

(OK so this is not a pretend family and they are all the same, but I’m sure you can use your imagination…)
In R we can use sample to draw from 0s or 1s (boy or girl) with equal probability

Our first family with 5 children had two girls (the 0’s), then two boys(the 1’s), then another girl. Our hypothesis just pertains to the number of boys, so we can just take the sum of our family:

And we have the number of boys for this family.

To get the p-value from our plot above, we need to do this procedure for 10,000 or so pretend families, and then calculate the percentage of those trials that match our observation (sum to a total of 5).

It turns out R gives us a shortcut to this, allowing us to get the number of boys positive outcomes from successive Bernoulli trials quite easily:

The 2 here represents the same 2 that we got when we did sum(oneFamily)… Our first family has 2 boys. Lets do it now for 10,000 families:

How often do we get all boys?

First, because we are simulating randomness, the outcome of any given experiment (in this case 10000 families) will drift around 3.125, but won’t be precisely 3.125. You can reduce the standard error in the estimate by sampling more families (try 100000000), with error going to zero as numberOfFamilies approaches infinity.

Second, even with more samples, there is likely to be some error in our estimate due to the fact that the random number generator on our computer is not ‘truly’ random. It is a reasonable approximation of randomness, but it turns out randomness is not so easy to generate.

The threshold typically held for rejecting the null hypothesis is 5% or 5 families with this observation out of 100 total families. This suggests that if your family with 5 children has only boys, you can statistically reject the null hypothesis and conclude that this result is not due to random chance! You assumed innocence (normal probability), simulated a bunch of outcomes, and found that the observed outcome (5 children, only boys) is sufficiently rare to believe it isn’t due to random chance.

Well, not so fast…

Some Problems With Our Conclusion

While it is nice to have a conclusive line drawn in the sand about statistical significance, there are several problems with this conclusion. First, note that even with random chance, a non-trivial number of families out of 100 are likely to have all girls or all boys. Given the number of families with children, we must expect at least some of them will have children of only one sex. We could consider the entire distribution of families and discover if it deviates from our expectation, but drawing conclusions based on one family seems difficult in this case

It turns out that this issue has importance beyond simple curiosity. A p-value of 0.05 has been used as the standard across many scientific disciplines as a threshold for declaring a finding statistically significant and therefore publishable. Setting the bar too low means that we might not have reproduceable results setting the bar too high means that important results won’t be be published.

It would appear that the evidence is coming out on the side that the 0.05 threshold is too low, and thus, there has been a push recently to lower the threshold for the p-value from 0.05 to 0.005, or 0.5%. Partially derivative did a nice podcast on this, check it out here.

To get a sense of why this may be a problem we can do a simple thought experiment. The scientific process typically goes something like this:

The formulation of the p-value is purposefully skeptical. It says, “OK, your trying to prove that this or that happens. What if nothing really is going on, how many times would we magically arrive at the conclusion you just observed?”. Lets say we wanted to make the argument that the actual ratio of boys/girls for some populations is not 50/50. To do that we decided to study the distribution of children from 100 families. Turns out if you look at enough groups of 100 families, you’d find one that you could use to support your hypothesis:

Perhaps you want to study what is influencing the defect rate for a particular widget You collect several thousand variables gathered during the manufacturing process and build a statistical model that predicts the defect rate. In a sense, you are performing thousands and thousands of experiments (probability of defect rate given feature 1,2,3).

Because of this, its highly likely that some of the variables will have statistically significant (p<0.05) correlation to the outcome even there is absolutely no correlation!

This stresses why it is important to evaluate the outcome of these types of experiments with a subject matter expert. Is there some physical or process explanation as to why these are correlated? Does this lead you towards another hypothesis you could use to independently verify the result?

How many children do we need to meet the more stringent p-value suggested by the literature? 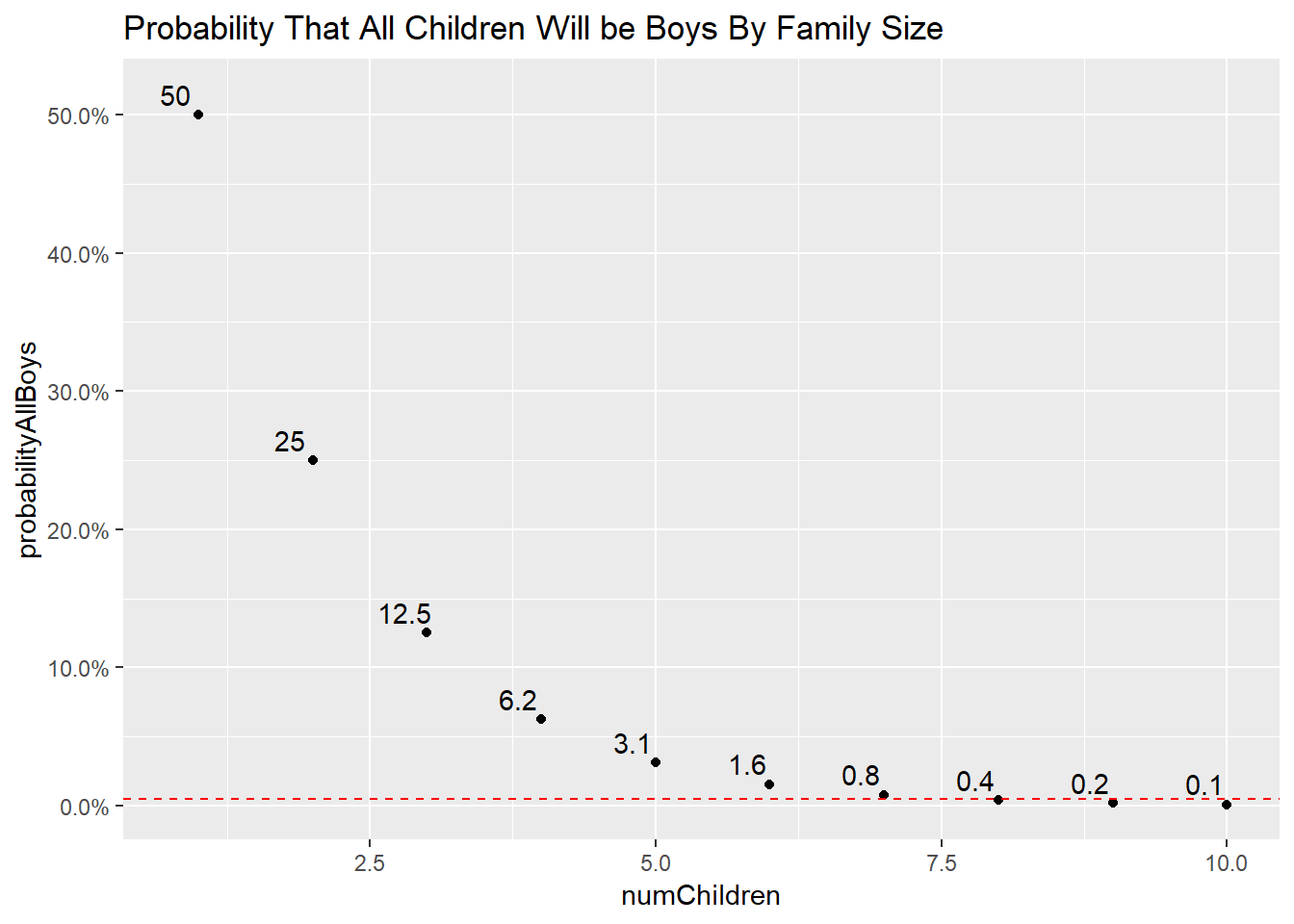 The new, more stringent p-value threshold suggests that if you have 8 children, and they are all one sex, you might have a problem on your hands.

But lets be honest, if you have 8 children, you already have enough to worry about!

But have we formulated the problem properly? What we really care about is how many children would you have to have of either sex to conclude something is wrong. To calculate the probability of this, you double all of the probabilities above. Doing so lands us at 9 children.

If you made it this far, hope you enjoyed reading, and stay tuned for my next blog post which will use the simulation principle developed here to statistically verify claims made in childrens stories with web scraping, nlp, and parallelized simulation.